Take a walk through Newark’s Riverfront Park searching for poems that tell the stories of the people who visit it! Listen to the poems by following the trail of photographs by photojournalist Ed Kashi that provide clues for discovering the poetry in and of Riverfront Park.

Poetry has long been a means of personal storytelling; PoemQuest tells the story of Riverfront Park through the voices of local poets commissioned by Newest Americans to interview visitors and share their stories through poetry. The poets asked questions designed to understand how visitors are connected to the park and to New Jersey—Where did your family come from before settling in New Jersey? What brought you here? What brings you to this park?

PoemQuest connects art to history through an interactive game that peoples the park with poetry. Once you play the game we encourage you to share your own poem about the journey that led you to Newark and your connection to Riverfront Park. Submit your poem

Saving the World, One Scrimmage at a Time

And You Ask Me, Why Here?

Welcome to PoemQuest. Join us in a tour of Riverfront Park through poems that tell the stories of the people who visit.

Tucked into the heart of the Ironbound, Newark’s Riverfront Park connects the city to the Passaic River, which has shaped its history and character for almost four centuries. Yet for decades, Newarkers did not have a waterfront they could call their own. For over a century, factories in Newark dumped effluents into the Passaic, filling it with vast quantities of toxic waste. The river is now a Superfund site and the focus of one of the most expensive clean-up efforts in the history of the Environmental Protection Agency.

Riverfront Park spans over four acres and opened in 2013 after years of lobbying for a green space by Ironbound residents and their advocates. Today, on its boardwalk and lawns, alongside sports fields and historic installations, the park hosts festivals and events that reflect the Ironbound’s rich immigrant culture and Newark’s ethnic diversity. The park is a testament to community efforts to transform once-contaminated land into a much-needed neighborhood resource: public green space. 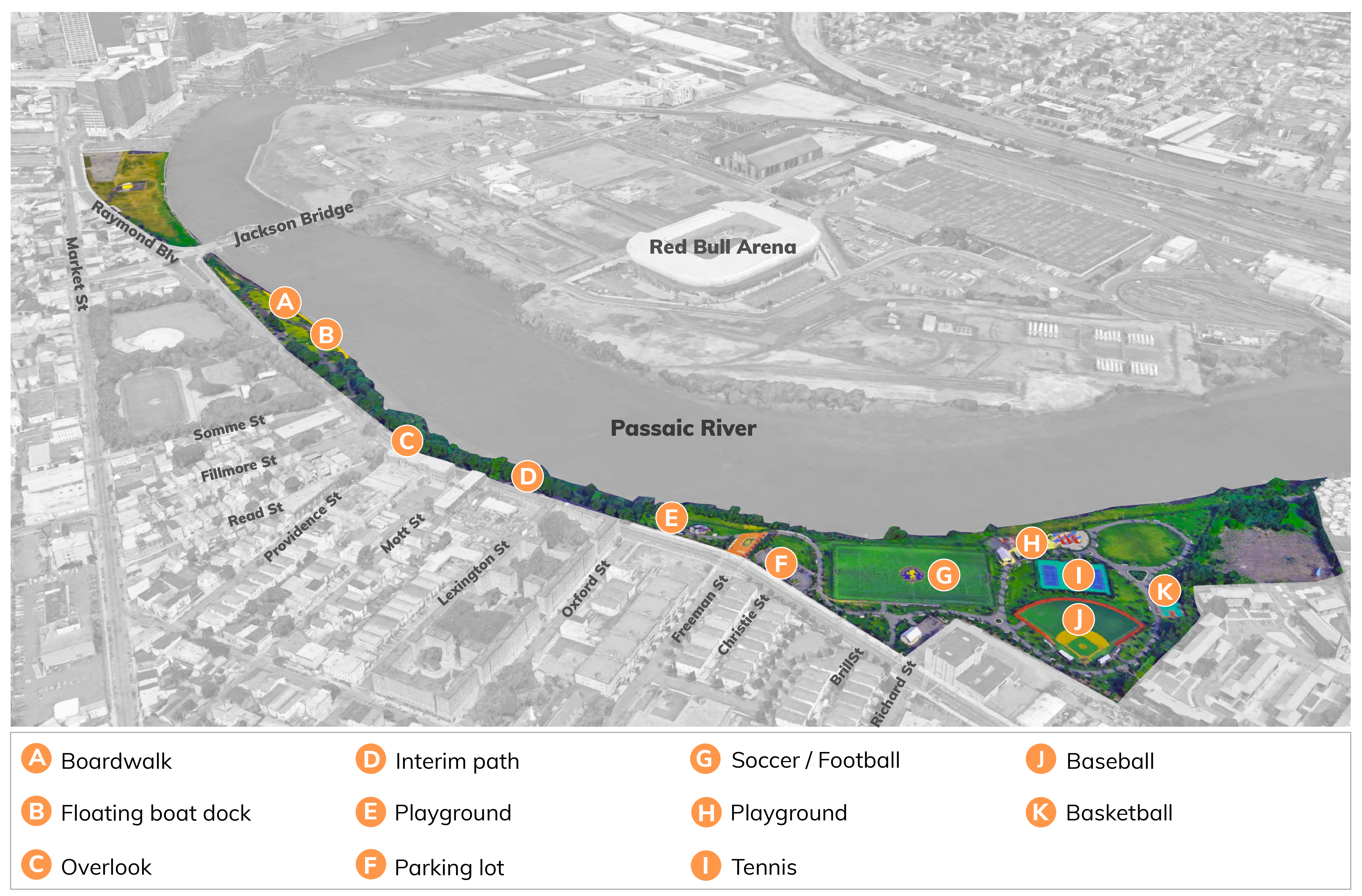 Saving the World, One Scrimmage at a Time 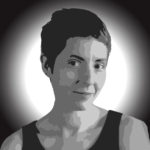 Ntwademela, he who greets with fire in Sesotho,
hails from post World Cup South Africa
by way of grandfather and father’s West Virginia,
attended Rutgers playing what America calls football,
a scholarship to study econ and pre-med bio,
then graduated to found a nearby tech startup—
says, “what I’ve learned…I’ll always use it”—
does not worry how long he’ll live in Canarsie, Brooklyn,
before moving on, smiles while scoring goals on a Newark
Riverfront summer afternoon, a pick up with a Spanish-
speaking friend who says he’s gotta run
when I start asking too many questions, who
Ntwademela later confides is homeless, adds,
“If you go to Market St., you still see lots of them.”
On a polished turf pitch in the middle of a renaissance
he who greets with the energy of the sun declares,
“I’m not a politician. We are all people. I do what I can.” 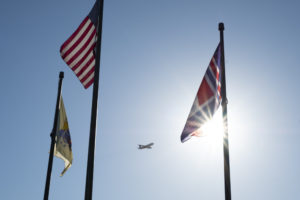 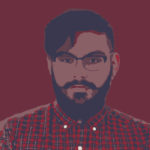 “Together with Nike Basketball Design Director Leo Chang, Nike designer Ben Nethongkome built
a shoe that could harness the power of Kyrie’s lightning-fast footwork on the court, and speak to
his unique style off the court.” – nike.com

Did you see him speeding by in all black and white?
Full force before he hits that midcourt in and out cross
and you catch his size 6 Q-Tip bright white Nike signs
right before he hits the backstep to fadeaway jumper.

He’s the man in these mid-tops that give him bounce
from University Heights to the Ironbound. Every touch-up
a Saturday morning cereal bowl spoon feeding of catalog-like
information before dropping dimes to a teammate.

“He’s getting past me because of his flexible traction…”
he runs down the court and cuts like grass before
taking his jumpshot. The next play he makes a layup
with my large hand in his face and lets me know,

“His responsive cushioning is giving him ups!” I go slightly
left when his body goes slightly right and I catch the gleam
of an orange sun in his glasses when he yells, “Curry!”
burying another jumper from the lean. “You see the split

down his sole? That’s how I can shake you,” he says. This kid
has dreams like all the others that spit wishes onto this court
he spits a snow globe of hustle in a glob of phlegm. Even
screaming a Warrior’s name I see him closer to the man

that represents his shoe, “Did you know Kyrie Irving is from
New Jersey?… West Orange… but he went to school in Elizabeth…”
And he tells me basketball is his life when I’m taking a water break
in this summer heat. That he’s at this playground whenever his mother

can bring him on Saturday or when his sister has a softball game.
His park is like my park where I had a similar dream. Where I based
skill off of the double handed dunk stitched to the side of my shoe,
hanging low in the post, backing down twice before taking a powerstep

to the rim. I didn’t mind if I played half court or full court, as long as
I was allowed to stay in this box where time was only understood in the
score of 21 and win-by-two. Where throwing orange suns until dusk
helped us burn brighter than the idols we worshipped on our sneakers. 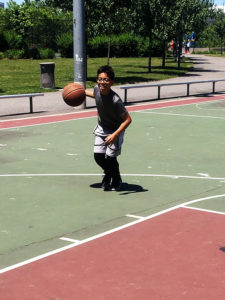 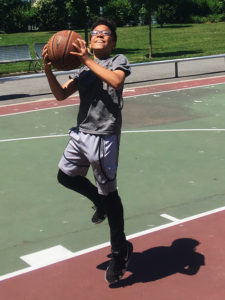 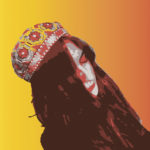 Dilapidated heart
Mouth descends
In Latin, she means beautiful
Cow-like coat
Unable to contain her happiness,
She searches for hands
Warmth and treats
You look away,
From the Earth that Bella plays in
From the soccer field that held your dreams
From a being that stares back
Smiles of ineffable reflection
A reminder of a lover,
Your face, a reminder of who is no longer here
Fifteen and blossoming of a future,
Promised a rose garden,
Would you have stayed in school?
Your departure, a mystery
A few weeks and you’ll be homeschooled
What will your future say in adages,
Neff hat, purposeful on a cold day
Acne on your cheeks
Hallmark of youth,
You say goodbye,
I’m reminded of absence once more 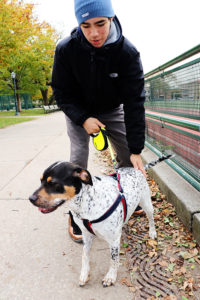 Dawn, your fingers bright with tats of roses and bling,
don’t throw a fit because your Portuguese Orion
strolls the park on break a couple times a week.
He’s not hunting for some sweet young thing,
he says, just likes watching the people, pick up ball,
gets the feels, the peace he doesn’t from working
in a body shop, remembering the blasted beasts—
stacks of trailers when this “beautiful, clean park…
was just a dump…now “it’s a whole new city”—
shinier than Troy (the smartass poet interjects)—“Huh?
“I’m from the Ironbound,” says Orion, whose real
name he asks to keep off book, but whose first initial
rhymes with “are,” as in we are walking in the sun
regardless, listening to our muses on our twists and turns… 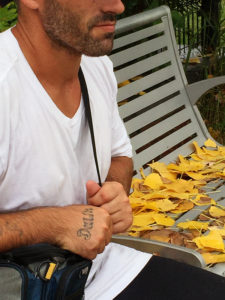 I couldn’t tell what it was
at first

my sister and I thought
turtle-myth

like the Jersey Devil
still living in forest fires

this sighting can outlast
dumps of chemical waste

evolving a filtration system
within lungs not absorbing lead

plump and floating
it could’ve been a rock she said

but I remember reading
about the five families of New York

to the bottom
by the boardwalk

I went scouring the park
that morning for a culture

to dissect a down neck history
to spin a new legend

just floating in the water 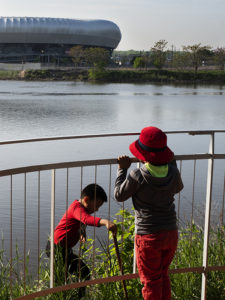 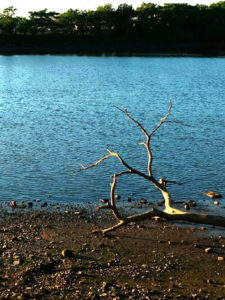 With hesitation, we approach
Make judgments of safety,
Without hearing you,
Judgments on the threads that hang on you,
From an infamous hoodie
Confiding your reality
Sincerity acknowledged with stares
With privileged laughter
A self-possessed panhandler,
Need in our eyes,
That we could never pay forward
And when the last moment arrives,
Departure—
Without George Washingtons or Lincolns,
Our pockets turned inside out
Your eyes drift down,
You walk away into the path
The trees fall by your side,
Disappointment reconstructed
Black and grey, your silhouette among the pigeons,
Monet’s watercolors,
Colorblind

I leave myself
as witness for us,

for this strange river’s mornings,
for quartos and rooms,

on ironbound bridges,
tracks in the marshes.

Leave these fados
as new maps for others:

but we will unfurl them
and write down our names.

In the quarry, the shovel exhumes
As metal meets the contact of rocks
Clunks and echoes
A highlighter in the rain
Hands never seeing light of day,
The river in your hands,
Murky, oxidized, mud
Surface area of dirt,
No sight of skin
To correct a mistake,
Shovels and tanks
Sewers and pipelines
Calibrated, stable
For children to play
To watch their grandchildren running
Across a field 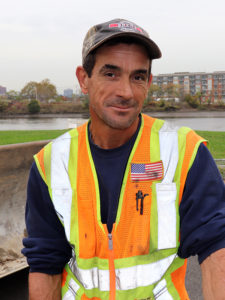 And You Ask Me, Why Here?

Say you old
and you remember Myrtle Beach, South Carolina.
Mommy’s Kitchen Restaurant.
11 years there to your 60 years of Newark.

Say you old
on Sunday you’re at Seaside Heights
smoking a cigar and watching the waves come in.
Thursday you’re at the Riverfront Park
with an iced coffee watching people play soccer.

Say you old
and you say you live off of westside oranges
but you teach the youth of the eastside to pipe down,
To take their deep apartment building breaths
and watch their brain waves roll in and out.

And you ask me, why here?

A park is opportunity,
those little kids in lines like ants
come from that preschool across the way
and they play at this little park
until the sun is too high
and though their breaths are small they
breathe in those people around them
and a world becomes larger.

Say you old.
A park is everything for those who have nothing.

Say you old,
and you notice the young couple holding hands
and the Portuguese seniors picking flowers beside
the court of old heads playing basketball with young
high schoolers on the other half court
who came with their friends splashing water
at each other from the drinking fountain.

Say you old,
But you can still hear the Samba class too.
Not far off in that field you could watch the instructor
cut a hot wind with his hips and a piece of shirt and barefoot
watching him lead 15 people of sweats that follow his footwork.

Say you old
on the regular you see these people
all similar – like on the daily that
young woman living in the shelter
always occupying that certain bench
where the trail splits. She always lies across it
waiting for those airplanes to fly over
the part of the park with no trees and one day
one day she will leave or the sky will crack open
the way people who don’t use the park do
because this park is nothing without its people.

Say you old,
Sixty. Seventy. Eighty.
And you don’t use the park
because you have a boardwalk.
So you become its landscape
of Jersey Shore news,
walking, jogging, riding bicycles
with those big Texas longhorn handlebars.
Well, we could use a camera here too
so people can share in the vitality
of what it is to sit on a bench and
read the paper to the sounds of unity:
our pick- up games and little leaguers.

One can call me old
but then you would be, too.
Just take yourself back
To a time where you were happy
to just run and play tag,
to jump and play hopscotch,
to skim the best rock on the water
or hold the longest wheelie down the block.

And now you sit here on this bench
Right here
And every answer you ever needed
Is somewhere in this park. 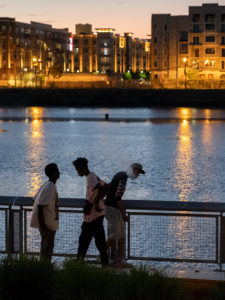 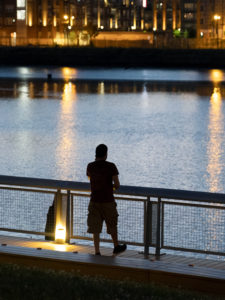 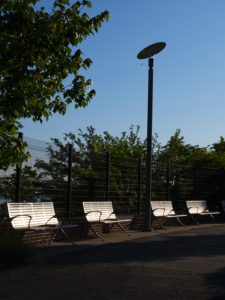